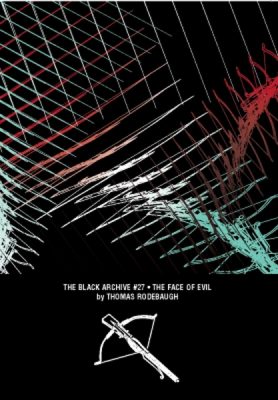 ‘You know, the very powerful and the very stupid have one thing in common…’

When Robert Holmes and Philip Hinchcliffe asked Chris Boucher to write about a civilisation that breaks down when its controlling computer fails, Boucher handed in an outline called ‘The Day God Went Mad’. The finished serial, retitled The Face of Evil (1977), featured a giant stone face of the fourth Doctor and the introduction of Leela.

This volume of the Black Archive puts the ‘mad god’ Xoanon on the couch for analysis – but also examines the stereotypes of ‘madness’ and Freudian explanations for behaviour that pervade the serial (and the series).

Viewing the serial through a psychological lens uncovers answers to many questions, including whether the different Doctors are really so different, what madness means in Doctor Who, why exactly Leela’s eyes had to be brown, and whether Boucher really based his script on a novel by Harry Harrison. Bonus features include a report on a study of the Doctor’s personality and a new interview with Boucher.

Thomas L Rodebaugh is a psychologist and an associate professor of Psychological and Brain Sciences at
Washington University in St Louis. He has published over 100 articles and chapters in scientific journals and books. He has also published fiction.

BUY THE FACE OF EVIL

NB For those who purchased copies of this title before 30 August 2019, a minor error was noted in the graphs in Appendix 1.  Please visit this page for details.