You are here: Home › Uncategorized › Seasons of War (ed Declan May) 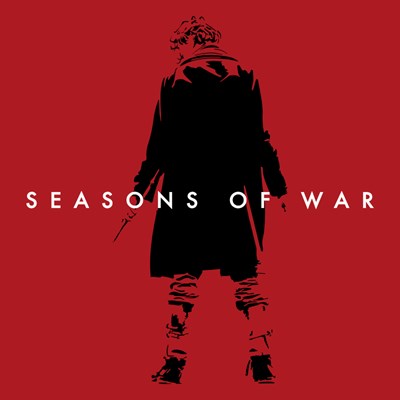 It’s a charity fanthology starring the War Doctor, in aid of Caudwell Children. This charity helps to support children with physical disabilities and learning difficulties and here’s their website:
http://www.caudwellchildren.com/

The book’s also dedicated to the memory of the late Paul Spragg, about whom Nick Briggs writes movingly in a preface.

As for the book itself… well, it doesn’t feel like Doctor Who. . That’s what makes it interesting, of course. It’s set during the Time War and it’s embracing the War Doctor in all his anti-glory. Almost anything you’d expect his other incarnations to oppose furiously, he’s capable of. He kills innocents. He sends friends to their deaths. He doesn’t have much of a sense of humour left. He’s not malevolent and he doesn’t enjoy what he does, but he’s someone to be afraid of.

The result is a book that, frankly, isn’t much fun. If Doctor Who. were always like this, we wouldn’t watch it. However that’s the whole point of the War Doctor. That’s who he is. If this collection hadn’t gone down that road and instead had faffed around with generic adventures that could have starred any Doctor, the exercise would have been a waste of time.
This is an admirable collection. It’s sincere, it’s focused and it’s exploring its premises so wholeheartedly that the results can be shocking.

Before I go any further, though, I’d like to veer off on a tangent. This isn’t meant as a slight at all, by the way. I’m just being philosophical. What’s the purpose of War Doctor stories? They’re clearly not trying to be regular Who, so what are they instead? What’s the reason for them? What are they saying? Are they simply an expression of the fannish urge to fill in gaps and explore the unexplored? (Nothing wrong with that.) Are they commenting on Doctor Who. , or even perhaps on something larger? Are they saying anything about war in the 21st century? World War Two and Vietnam both left their mark on the mindset of the 20th century show, after all, while Peter Capaldi’s first series was discussing modern war and our attitudes to it. Danny Pink served in Afghanistan.

Seasons of War isn’t doing much of that, I think, because it can’t. Unlike Western military interventions in the modern era, it’s not about one side sending in overwhelming force at little direct risk to itself. The Time War is a fight for survival. (It’s also a time-twisting SF war for survival, which raises yet more issues.) The Daleks and the Time Lords are evenly matched. Nowhere in the universe is safe and extermination can come at any moment, courtesy of either side. Entire planets can get caught in the crossfire. The Time Lords have a weak sort of moral superiority because it’s hard to be more evil than a Dalek, but in practice both sides will do anything at all. Atrocities are routine and even the War Doctor accepts them as the price of keeping their heads above water. I approve of all this, obviously. Not everything has to be a metaphor. Indeed, I’m sure this book would have been unreadable had it been distorting the Time War to be Iraq-shaped, for the sake of being Contemporary and Relevant.

One thing it does raise, though, more directly than anything in the TV show, is the questioning of the rightness of one’s own side. Are we being the bad guys? Are our actions justifiable? (That’s in no way unique to 21st century warfare, obviously.) It’s not like World War Two and the fight against indisputably evil Nazis, which is intriguing in itself given the Daleks’ long-standing status as Nazi surrogates. Fundamentally, though, I think the War Doctor and the Time War are simply a route to new kinds of stories, smashing through barriers that are normally unbreakable in Doctor Who. Causality is just one of many victims. The exploration of what it would mean to fight a Time War is in some ways going further than we saw from the TV series or from the Virgin or BBC Books. It’s not Faction Paradox either. The book re-examines basics of the show’s format, e.g. the companion. Yes, the War Doctor gets a companion. He doesn’t want one and she only meets him very occasionally, like Moffat-era companions but more so. Nonetheless she’s a companion. Her name’s Jenny Shirt. If that reminds you of Star Trek red-shirts… well, yeah.

She’s one of my favourite things about the book, by the way. Poor Jenny.

The quality of the stories is high, although of course there are some that perhaps aren’t entirely successful as stories, or could have explored their ideas more deeply. You’re unlikely to fall in love with many of them, but that’s the nature of the beast. The War Doctor isn’t lovable.

The collection has power, though. Almost immediately we get punched in the face by ‘I, Kar’, with plenty more to come. It’s horrible. That’s the point, of course. ‘The Eight Minute War’, ‘The Celephas Gift’, ‘Here Comes the Doctor’, ‘The Holdover’, ‘Sleepwalking to Paradise’, ‘Guerre’, ‘The Thief of All Ways’… lots and lots. I could go on. That said, though, sometimes there will be a core of kindness and humanity. This is a life-saver for the reader, obviously. Without such elements, the book would have been unreadable. These points of gentleness are liable to be a character (e.g. the old lady in ‘Gardening’, or Alice in ‘Everything in its Right Place’), but it can also be something odder and just as wonderful (insects in ‘Storage Wars’).
There are lots of interesting ideas. ‘Crowsnest Past’, ‘Everything in its Right Place’, ‘Corsair’, ‘The Book of Dead Time’ and others are intriguing, cool and/or weird. ‘The Time Lord Who Came To Tea’ has an idea that’s blackly hilarious. “After recovering from the shock I went straight into panic mode. We couldn’t possibly serve the war hero Dalek for tea, even if it was the best of cuts and well seasoned.” Then Kate Orman’s ‘The Ambassador From Wolf-Rayet’ pleased me with the almost Leonard-like alien biology of its protagonist. “Her brains (one for each eye) simply would not shut down.” “I was worried you might dry out and go into hibernation.”

Even the continuity references play a uniquely valuable role, I think, reminding us of more innocent times and so adding gently bittersweet undertones. I smiled at “might even catch a gumblejack”, for instance. It’s easy to get them wrong, of course. Even the tiniest reference might seem too much. ‘The Horde of Travesties’ in particular might give the impression of fannish overload, but if you can get past that, it’s a fairly horrible idea that makes sense given the Time War and what would happen in it. On the whole, I felt continuity here was a plus. We’re also reunited with Leela (briefly) and the Brigadier (at greater length, in a strong story with a lot to say on the Time War’s themes).

Some other stories I particularly liked, in no order, were:
(a) ‘The Amber Room’, which feels human and real, with a delightful turn of phrase. “A jacket hung on his coat hanger form as if waiting patiently for the moment when its owner might grow into it.” Loved the protagonist. The reality-editing is cool. There’s something faintly unsatisfactory about Time Wobbliness Plot Resolutions, just by the nature of the best, but I love the punchline.
(b) ‘Here Comes the Doctor’, perhaps. It’s memorable. Its hospital and the people who live and work there might linger with you.
(c) ‘Disjecta Membra’, which is nice and weird. Cool idea and I like the ending, with a particularly strong treatment of “I’m not the Doctor”. (The War Doctor’s attitude to his name is unavoidably one of the collection’s major motifs.)
(d) ‘Driftwood’, for its ideas. A Dalek that’s found peace and is looking after two innocents? Well, sort of.
(e) ‘Always Face the Curtain with a Bow’. Oohhh, I really like this one. I like the gentlemanly infinite murder loop and the fascinating lengths to which it’s being taken. I loved the effect this has on the Colonel. Incidentally, I remember the 1980s FASA Doctor Who RPG having a Time Lord who called himself the Colonel and was an industrial-scale twat.
(f) ‘The Postman’ and its “War Office Department of Officially Sanctioned Condolence”.
(g) ‘Meals on Wheels’, by Paul Magrs. Do I need to say any more? Brilliant. There’s no War Doctor, no Time War and no horror to scourge our souls, but on the upside it’s lovely and hilarious. I love his down-to-earth prose, which (as with ‘The Amber Room’) is charming because it makes his characters feel real. Doctor Who. isn’t normally about reality. There’s beauty and wit in the way Paul writes Jackie going round old people’s houses doing Meals on Wheels. “‘I’ve been plotting the ultimate destruction of this world and my revenge upon all of mankind,’ he said, furiously. ‘Oh, yes?’ Jackie smiled, and went through the cupboards looking for a clean glass. ‘Look, shall I do these dishes? They’ve been standing here for days.'”
One question, though… is Davros’s chair equipped with, um, toilet facilities? It’s the right shape, but…
(h) ‘The Moments In Between’ by George Mann, who’s also written a War Doctor novel for BBC Books, with which I believe this story is linked. It’s really nice. Underneath, though, something really dark is suggested.

Lance Parkin’s story entertained me and does something unique. Jim Mortimore writes a wonderfully mad comic strip, which I’ve given its own review. Andrew Smith (yes, from ‘Full Circle’) gives us a dynamic storyline. John Peel’s story tickled my fannishness by doing the Movellans and neither confirming nor denying ‘War of the Daleks’. Gary Russell’s story is both good and quite funny.

Oh, and I presume ‘The Ingenious Gentleman’ is aware that John Hurt is playing Don Quixote in a 2015 film called ‘The Man Who Killed Don Quixote’, currently in pre-production? “I wonder if perhaps there’s more than a bit of you in this old face?” (That’s one of the collection’s gentler, more Doctorish stories, by the way.)

One minor nitpick. A number of authors have variants on H.P. Lovecraft’s Necronomicon, but they’re inconsistent. We’re told of Necrochrononicom, Necrochronomicon, Necrochononicom and Nechronomium. Personally, I’d have assumed the natural choice was “Nechronomicon”. Maybe it needs another syllable to make the pun more obvious, though.

I admire the editor’s contributions, not the least of which is Jenny Shirt. I particularly liked his use of language. His prose has style, strength and suppleness. ‘The Nightmare Child’ in particular goes into full Lewis Carroll mode, which I loved. “What ghast! What ghastsome, switchblade inferno.” “Not a one, not a single Flice, reported the presence of Davros. Had it done so, perhaps the barbarism and furysome quantum slaughter of Chimera would have ended differently.”

Oh, and I loved reading ‘About the Contributors’! It’s fascinating to learn about the writers, artists and others who worked on this book. More anthologies should do this.
Overall, it’s extreme. Whatever your personal boundaries might be for “Doctor Who. shouldn’t be like that”, this book is setting out to violate them. I wouldn’t want to be reading stories like this on a regular basis, but I think the Whoniverse is stronger for containing such a bleak and brutal outlier. Was the War Doctor really like this? Who knows? Probably. Here, at any rate, he is. You won’t get anything like this on the TV show, but that’s all the more reason to hunt down this book. If nothing else, you’ll be supporting Caudwell Children.

FOR MORE REVIEWS BY FINN, WHY NOT TRY TIME’S MOSIAC?