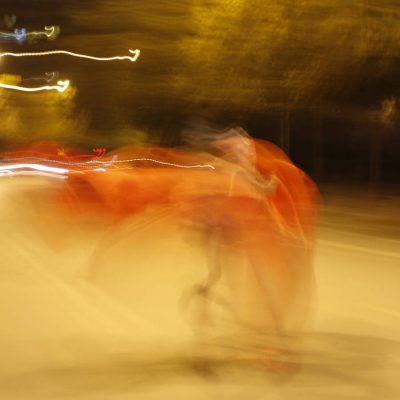 The thing with drone is that – even more than other types of music – just as much depends on what the listener brings to the experience as the creator intended. Titles are a helpful guide to the intent of the artist, but as often as not I find the images a drone piece conjures up in my head to be a mile away from the label attached to it. ‘A Shadow in Time’ is an example which both exemplifies and contradicts that point.

Let’s start with the title track, a 20 minute plus slice of layered sound, in which individual layers build and peak, then fade back into the background, all set against a constant, swirling hum. Listening to this on decent headphones in a dark room, it begins – for me – as the soundtrack to some slice of early sixties’ BBC science fiction; a slow walk across the moon, or a monochrome pan across planets hanging in matte painted space. Four minutes or so in, and the little effects which prompted that image disappear from the mix, and we’re left with long washes of sound, where one note or other dominates for a space then falls back again, the sound to me of travel and things passing by. And then, fifteen minutes in, sparse chimes and muted bells herald a slowly building repeated refrain of 8 or so notes which increase in clarity until the end. It’s a beautiful, restful piece, if a little different from other Basinski I’ve heard.

The flip side, ‘For David Robert Jones’, on the other hand, is more straight-forward and does exactly what it says on the tin. It begins much like ‘A Shadow in Time’ with waves of swirl and drone, but after six minutes the sound of (Bowie’s?) disintegrating saxophone bleeds into the mix and takes over, repeating its brief, collapsing riff for fifteen glorious minutes, each time ending with what sounds to me like a foghorn (and with the track being a requiem, I can’t help but picture a boat being guided through the mist, like some Styxian vision). It’s a melancholy, but perversely triumphant, piece and one the man himself would have appreciated, I think.

If you only listen to one track listen to…

(digital only on Bandcamp – also available on vinyl and cd)