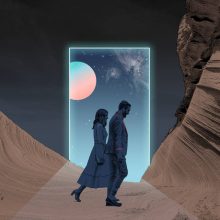 It’s a bit of a strange concept – an album of songs based on a single episode of the tv series Doctor Who, and not even the modern wildly successful show, but the old one from the 1980s.  But hey, I love 20th century Doctor Who, so I’m not seriously complaining on that score.

The story it’s based on – The Caves of Androzani – is a bit of an acknowledged classic, famous in equal parts for marking the death of one incarnation of the Doctor and for one scheming characters asides direct to camera.  In Doctor Who terms it’s both pretty grim and pretty layered and even poetic. so there’s plenty of scope for The Sevateem (another Doctor Who reference) to stretch themeselves creatively.

That they don’t really do so isn’t entirely their fault, though.  Part of the problem is that they very literally try to tell the story from television – and while a ballet dancer in a black and white face mask is a striking visual image, it loses something when you have to actually say the description out loud. Maybe the album is  a bit too ambitious for its own good, in fact.  It starts very strongly with ‘Anywhere in the Universe’ which, vocally and musically at least, is reminsiscent of something damn good by Ladytron, but the fact that the band employ a variety of different vocalists means that this height is only occasionally matched elsewhere.  Styles too change a bit too often so that three tracks in we get the slightly lumpen school disco beat of ‘You Work for Me’ where more tracks along the same lines as the opener would have been far more welcome.  Sometimes ‘just like the last one’ is a legitimate approach.

The album’s like that throughout, in fact  – a series of highs and lows, often in close proximity to one another: ‘Pay for this’, a just about adequate stab at Pet Shop Boys style 80s pop, is followed by the far superior ‘Is it Wrong?’ and so on.  Basically if (I assume) Janey Winterbauer is singing, then it’s one of the better tracks.

To be clear thugh, there’s nothing awful and much which is excellent – and proceeds go to ‘Doctors without Frontiers’, and there’s enough good stuff on here to make it more than worth a fiver of anyone’s money. If you only listen to one track, listen to this: Available as a digital download: https://thesevateem.bandcamp.com