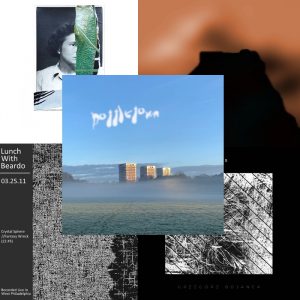 This week’s music listened to via the happy accident of finding a free bandcamp yum code on Twitter.  As usual, the range and level of creativity and talent is impressive…

This is one of those records which is often described as ‘challenging’ by reviewers (in fact, i can see a reviewer calling it just that on the webpage). At times, it’s the sort of freeform jazz which would make my dad shake his head and say ‘what on Earth are you listening to now?’ when I was younger. At others, it’s a mad skitter through found sounds. And then there’s moments when it appears a set of sound effects from an old BBC album has been put on shuffle on Spotify. What it never is, however, is boring – and that, I suspect, is the aim.

Live psychedelic drones, split across 23 minutes and two tracks, though it’s not immediately clear where track one ends and track two begins (though if I had to guess, I’d say around the ten minute mark). Not that it really matters – this is dark and spacey improvised drone at its best. Apparently this live recording is the band’s first release since they went their separate ways a decade ago, but I’ll need to look out formore of their back catalogue if this is an example of the music they created back in the day.

More like very laid back techno than the ambient I expected, with muffled, echoey drums and bass, tiny electronic stabs and fluttering chords. I suspect I don’t have the genre vocabulary to slot this into the right place, but to me this sounds like the liminal space where ambient meets the dance floor. I can imagine rocking back and forward to this, a little bit intoxicated, in a club full of smoke and cool lights. Very, very mellow.

I don’t review everything I pick up via a yum code, you know – that wouldn’t really be fair, since there are times when the style of music is itself something I can’t get on board with. Beyonce-style smooth R&B, say, or especially bland europop. And sometimes, the genre’s fine but the music itself isn’t – and since I both got the music for nothing and, often, the musician is just pursuing a hobby, it’d be an arsehole thing to then slam them on a website (even one with as few visitors as this one!).

So these reviews are always just the five tracks or albums that most took my fancy in the previous week of listening. I think they’re all good in other words.

But even amongst a set which have already been pre-selected because I like them, there’s usually one in each week which stands out. And this is this week’s particularly good album. It’s got a bit of everything for a start – it’s unashamed electronica, but across its 13 tracks it takes in ambient, cut up, idm and plenty else. It’s often a deliberately uncomfortable listen – where there’s a warm soothing flow to some tracks (check out ‘Fucked Jazz Melody’, for a gorgeous example) it’s frequently immediately counter-pointed by insistent drums and ragged synths on the next song along (in this case, Elf Machine, which itself moves from smooth to jagged and back mid-track), while other tracks use static and found sound to unsettling effect.

This isn’t an album to put on in the background and ignore – but that’s a good thing; ambient you can do that with is usually of the ‘let’s meditate and think of whales and lotus blossoms‘ school, and that’s the sort of thing that ends up in the ‘do not review’ pile…

(and only as I finished writing this did I realise where I’d heard the name boycalledcrow before – along with Xqui, he’s one half of Wonderful Beasts, who did a glorious album called The Art of Whisper last year.)