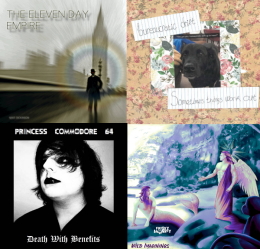 Back with another set of tunes which I picked up via free bandcamp codes…thanks to everyone supplied them!

sometimes things work out by bureaucratic drift
https://bureaucraticdrift.bandcamp.com/album/sometimes-things-work-out
Strictly speaking, this isn’t the result of a free bandcamp code, but I liked the first song on this when I stumbled across it on BC, and bought the album for a couple of pound, thinking it was a download – but then I got a hand-penned cdr in the post, complete with slipcase cover, which was unexpected. The music wears its influences on its sleeves – mainly American ‘punk’ bands like Green Day but I think I can hear echoes of R.E.M and the Replacements on the opener i wundr if this is how u felt and the later goes without sayin’, in particular.

For this child of the 80s, there’s a certain sort of electronica – very synthy, full of short catchy runs of notes, with basic but driving programmed drums and a mannered and moody vocal which falls somewhere between singing and speaking (think of the Human League before half the band left to form Heaven 17) – which absolutely hits the spot. Frisky Monkey are that sort of band so, predictably, I thought this was a blast (they also have a pretty damn good female singer called Sheersha on some tracks who provides a really interesting vocal contrast). They’ve got an extensive back catalogue on Bandcamp – I’ll definitely be investigating it.

Remote Quantum Bioscan by Ensconced In The Sofa
(Seems to be marked as PRIVATE, so I can’t link to the music, unfortunately)

All about the dancing, I suspect, this is high quality mellow trancy house music, bursting with electronic riffs and echoing drums. Trippy, chilled dance music played on an old school Roland keyboard.

This is beautiful. Like the spiritual sibling of the magisterial Boris/Sunn O))) Altar album, it’s filled with warped, vibrating waves which act as a backdrop to slow, menacing electronic notes sequences. The tracks smack of the subterranean, of sounds echoing off damp cave walls, and being muted by effect of deep water, like music from a lost civilisation, sonorous and profound, almost religious in their slow but relentless spread. It’s dark, but not grim – there are moments of light throughout the nine long tracks, and even a gradual sense that the outlook is improving as we near the conclusion.

I know I’m sounding pretentious here, but it’s because this is so good, yet so hard to explain. Go to the Bandcamp page, and play a track or two through decent headphones. You’ll hear what I mean.

Winner of best album name this week, and pretty good music too – imagine classical music played on the Sinclair Spectrum and you wouldn’t be far off. The first track is that Sugar Plum Fairy piece from The Nutcracker which was at one point used on a Spectrum game. If that sounds like the sort of thing you’d like – and why wouldn’t it? – give this as listen and, in the words of the artist, discover what Beethoven would do with modern synthesizers while on model airplane glue!

This is one album that I was pre-disposed to like, I have to admit. With another hat on, I publish the Faction Paradox scifi novels which this soundtrack is in part based on, so I was interested to hear how a musician would approach the story of the Eleven Day Empire (which, for the one or two people who have failed to buy one of the books from Obverse, is the slice of London purchased by time travelling terrorist cultists, Faction Paradox, which nestles in the eleven days lost in the switch from the Julian to Gregorian calendar in 1752).

And to my delight, it’s basically spot on! There are times when it’s reminiscent of Jeff Wayne’s legendary War of the Worlds soundtrack, and others when the influence seems to be Jean-Michel Jarre. There’s gothic moments, and industrial moments, intrusions of Kraftwerk and 80s electronica, ambient interludes and birdsong.

Give it a listen, and then go and read the books – you won’t regret either decision.