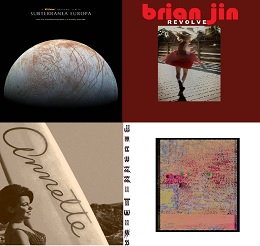 More free bandcamp code music briefly reviewed…only four this week because I only review the ones I like (if artists are good enough to give out free codes, it’d be a crappy of me to review something negatively, just because it didn’t ring my bell!).  But there are some absolute crackers this week!

Christ, this is glorious! A five minute slice of folk pop gorgeousness, with a pretty guitar line and some country inflected multi-tracked vocals, it made me smile throughout and then I put it straight back on again. One for anyone who loves good guitar music. This could well be my favourite single of the year so far, in fact.

Superior acid house (if that’s still a genre that people speak about, and it’s not now been subsumed into a subgenre of some other electronic dance music). By which I mean I could dance to this (if I were sufficiently well stimulated and I were still young enough to dance for more than thirty sweaty seconds at a time), but I can also stick this on in the house and just listen to it, with the mix of ambient sounds, judicious samples and (not in your face) beats a great soundtrack to a chilled, sunny summer day.

It’s impossible to play post-rock of the type on display here without raising the spectres of the twin goliaths of the field, Godspeed You! Black Emperor and Mogwai, but in these two tracks Volcano Kings do as good a job as any. Both tracks reference American beach parties in their titles (Annette Funicello being the star of many such films and the b-side ‘But Frankie is just so dreamy’…well, that speaks for itself) – nice to think that, in an alternate universe, this could have been the sound of surf music…

I’d love this for the concept alone – a soundtrack to a future documentary about the ecology of the underwater ocean of Jupiter’s moon Europa – but the music is liquid gold too, filled with soft, slow, hanging notes across which the sounds of Europan life intrude.