In a series where violent death is prevalent but the regular characters generally immune, Face the Raven (2015) is a rarity in featuring the demise of the 12th Doctor’s longstanding companion Clara Oswald. While Doctor Who’s basis as a time-travel series means that the audience will see Clara again, everything after her death here is borrowed time.

The figures reintroduced by Face the Raven all play unexpected parts: Ashildr, a Viking woman made immortal by the Doctor, is a mayor; Rigsy, a graffiti artist befriended by Clara, is a murder suspect; and numerous monsters from the series’ past have become refugees. Scripted by Sarah Dollard, an Australian living in the UK, the story uses the tropes and imagery of Doctor Who to comment on real-world issues of immigration, asylum and the penal system, its narrative leading directly to the Doctor’s own incarceration in the following episode.

This Black Archive draws on the history of London and its presentation in fantasy, on queer and feminist theory and on the mythic and folkloric symbolism of ravens to examine this haunting story. It is the first of three books dealing with the final episodes of the 2015 season of Doctor Who.

Sarah Groenewegen is the author of the novel Daughters of Earth, and of numerous essays on Doctor Who, gaming, and being queer. In 2016 she was awarded a British Empire Medal for her services to law enforcement and LGBT+ diversity. 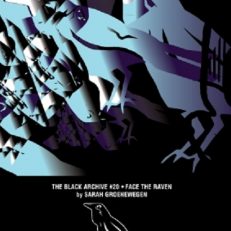