‘The shadow of my past and of your future.’

Representative of Doctor Who at its most experimental, narratively and visually, Warriors’ Gate (1981) was the rich by-product of a producer seeking to modernise the series for the 1980s, a radio writer and novelist who had never written for television, and a film director with one television drama to his credit.

Similarly, it explores the story’s complex blend of absurd tragicomedy, quantum theory, randomness and entropy, within the context of British New Wave SF, the philosophy of science, modernist theatre, film and television, German Romantic painting, pop video, and the development of electronic video effects. Many ‘authors’ contributed to the transmitted version of Warriors’ Gate and the book also considers whether it can be claimed as the work of a single author given the collaborative nature of its troubled production.

Frank Collins has written about Doctor Who in several fanzines and books, including The Pandorica Opens: Exploring the Worlds of the Eleventh Doctor and Doctor Who: The Eleventh Hour. He keeps saying ‘never again’ but here we are.

He’s written extensively about films and television for various websites and several essays have been included in Blu-Ray releases. 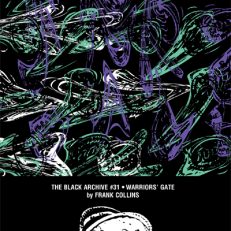