‘Is this honour? Is this war?’

Battlefield (1989) sees a clash of mythologies, as the progressive, anti-racist, sporadically pacifist Doctor Who of the late 1980s takes on Britain’s authoritarian, chivalric national myth of King Arthur. With a script by Ben Aaronovitch, now a bestselling urban fantasy novelist but then only the writer of the previous year’s acclaimed Remembrance of the Daleks (1988), it forms with its predecessor a ‘philosophical pair’, replacing its 1960s setting with an imagined 1990s and showing a Doctor dealing with the repercussions of his future actions, rather than his past.

Even as a script Battlefield falls short of complete success, yet it remains an emotionally literate, politically engaged and thematically complex piece. It finds areas of overlap between Andrew Cartmel’s radical conception of Doctor Who and Arthurian myth in the legend of a past golden age, represented by the return of Brigadier Lethbridge-Stewart and UNIT, and in the identification of the Doctor – always presented by the series as a wizard, a prophet and a mentor – with Merlin. It interrogates the patriarchal attitudes of both the Arthurian myths and 1970s Doctor Who from a contemporary perspective, and questions the attitudes to war found in both.

It also does an exemplary job of worldbuilding, sketching in a convincing near future based on a handful of lines, and presents a complex, questionable, even sympathetic villain motivated by a value system alien to our own. Finally, it raises questions of predestination: through the other characters’ foreknowledge of the Doctor’s future; through the fate apparently decreed for Ancelyn and Bambera; and, perhaps, through the Brigadier’s survival of a story whose structure seems to demand that he should die.

He has published five novels, including a trilogy of near-future Arthurian urban-fantasy political thrillers, The Pendragon Protocol, The Locksley Exploit and Trojans, and a Sherlock Holmes novel, The Vanishing Man. 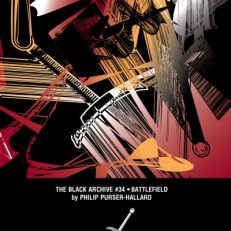