‘The systems aren’t the problem. How people use and exploit systems, that’s the problem.’

Kerblam! (2018) throws the Doctor and her team into the future of distribution and employment. The episode offers an exciting sci-fi mystery with uncannily creepy robots, intrusive artificial intelligence, and an explosive reveal of the antagonist. However, many viewers felt shock waves rock their own worldview in the apparent political messages of the story.

Examining politics, artificial intelligence (AI), robotics, and the closest real-world analogues of the Kerblam company raises questions about the Doctor’s own politics, the series’ use of AI and robots across the years, and whether current technology is more futuristic than that shown in the episode.

This Black Archive demonstrates that despite many changes instituted in the 2018 season, the depiction of the Doctor’s politics, AI, and robotics is heavily influenced by the past. It also shows how the present of AI and robotics is already much stranger than Kerblam! depicts. In the end, the volume proposes that the heart of the episode can be found in the answer to this question: who killed Kira?

Naomi Jacobs is a researcher based at the University of Aberdeen. Thomas L Rodebaugh is a professor of Psychological and Brain Sciences at Washington University. 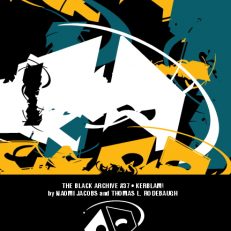