Four Black Archives, each investigating that most British of literary phenomena – folk horror. From Pertwee fighting the Devil in the crypt at devil’s end, through Tom Baker’s adventures with the Fendahl and Vivien Fay, to Peter Davison battling the Malus in Little Hodcombe, the genre has provided Doctor who with some its most memorable stories.

Image of the Fendahl

Image of the Fendahl (1977) is a fusion of the last great hurrah of the Gothic years of Doctor Who, before Graham Williams’ changes really began to bite, with the colder post-Gothic tradition drawn from Nigel Kneale and HP Lovecraft. A priory, a haunted wood, a village coven… a scientific investigation that reaches back 12 million years in time and hundreds of millions of miles away in space.

Writer Chris Boucher (also responsible for The Face of Evil and The Robots of Death) builds on his successes with a story that functions as a human drama, a scientific puzzle, a horror story, and a masterpiece of unease. Building its audience by nearly three million from episode one to episode four, this story is one of the great classics of the series, and still works as an effective adventure drama for a modern audience.

‘We are dealing with the supernatural. The occult! Magic!’

Something is wrong in Devil’s End. An archaeologist is overly eager in his attempts to dig into a barrow, a local white witch is foretelling doom and destruction, and the old vicar has disappeared under mysterious circumstances.

The Dæmons (1971) is a celebration of occult and new age history and culture, a story that cherry-picks from sources as diverse as Goethe, Kneale and Lovecraft. But how did this most unusual Doctor Who story become such a nostalgic touchstone for the era?

‘Think of it as the resurrection of an old tradition.’

Juxtaposing ghostly apparitions with mundane historical re-enactment, The Awakening (1984) is a response to the 1970s ‘folk horror’ genre from the perspective of the 1980s costume drama. It draws on a rich tradition of British cinema and television that explores time at odds with itself to depict a village verging on social and temporal collapse, and questions how we can responsibly remember and respond to the violence of the past.

The Stones of Blood

Though wearing its learning lightly, The Stones of Blood (1978) is saturated in the ancient history of Britain, from stone circles and their folklore to the names of goddesses, as well as more recent histories of archaeological investigation and the druidic revival. It also finds time to evoke the works and personal life of Virginia Woolf, predict juridical applications of artificial intelligence, and explore mathematical theories of the fourth dimension.

Simon Bucher-Jones has written or co-written five novels for Doctor Who and its spinoffs, one of which, The Taking of Planet 5, draws on material from Image of the Fendahl and HP Lovecraft, and ends with a pseudo-scientific paper which some critics mistook for the author’s doctoral research.

Matt Barber has a BA in Medieval Studies, an MA in the History and Literature of Witchcraft and a PhD in Film and Visual Culture, all from the University of Exeter. He has been a Doctor Who fan from the moment he accidentally saw City of Death when he was three years old.

David Evans-Powell is a historian, film scholar and reviewer.

Katrin Thier  is a historian, archaeologist and linguist. 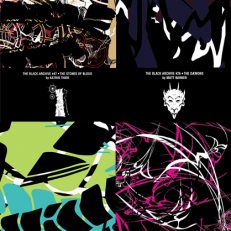