Four Black Archives, each mired in the past – what fans of Doctor Who refer to as pure historicals, in which pretty much the only science-ficitonal element is the Doctor and his TARDIS.

But this is Doctor Who, so nothing should be taken at face value. With a tragic figure imprisoned in a secret part of the house, Black Orchid (1982) is clearly mining literary traditions. The portrayal of mental and physical injury invites the viewer to examine their own prejudices. Similarly ambiguous is the representation of the native South American outsider who guards the former great white explorer.

‘This is the Plain of Pamir, known to those who travel to Cathay as the Roof of the World.’

Marco Polo (1964) reflects a cultural change reshaping TV’s role as historian, placing the interpretation of history in the viewers’ hands by recruiting them as travellers in Polo’s caravan. Examining camera treatments and mobility, adaptive and remedial interventions, public and book history, cultural assumptions and memories, this book celebrates the work of collaborators, copyists, studio personnel and fans in reconstructing this most famous and earliest of missing Doctor Who stories.

‘Oh, something else I forgot to tell you: I think I’ve poisoned Nero.’

Following 53 episodes of unbroken action adventure, The Romans (1965) was Doctor Who’s first ever comedy. Beyond this  seminal place in history – beyond the serial’s clever script, vigorous direction, fine acting and all the humour – it remains notable as an expression of 1960s culture, counterculture, and a burgeoning spirit of reinvention.  The Romans afforded us the gift of laughter and allowed Doctor Who the freedom to shed its skin.

James Cooray Smith contributed production notes to a number of the BBC’s Doctor Who DVD, and has written books and articles on popular culture for the New Statesman and others.He is the author of The Black Archive #14: The Ultimate Foe, The Black Archive #40: The Underwater Menace and The Silver Archive #3: Sapphire & Steel Assignments V & VI.

Dene October has seen Marco Polo twice. He edited Doctor Who and History and is a Senior Lecturer at the University of the Arts, London.

Jacob Edwards holds degrees in English and Ancient History, and has a lifetime’s happy memories of watching Doctor Who. 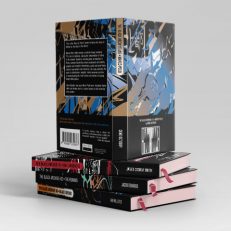