“These extraordinary books are like weird, grotesque shadow-versions of the Show we recognise. They are mutations haunting the wilderness between the domed, protected cities of Canonicity. The world of the Annuals is odder, darker, madder, more psychedelic and surreal. These are adventures in a wilder, destabilized universe. The cosiness of what we recognise as Doctor Who has gone.” – Paul Magrs, from the Introduction

From 1965 to 1986, from William Hartnell to Colin Baker, the World Distributer Doctor Who annuals were weird and witty and wonderful, a big brother to TV Comic and second cousin to Doctor Who Discovers… – and they all the more beloved by us because of that.

That’s right – it’s an analysis of every story in the classic Annual run – plus K9 and Company! ands the first charity Fan Annual – as well as a history, a selection of correspondence, interviews with the authors, and more…

IRIS WILDTHYME AND THE CELESTIAL OMNIBUS

Christmas television is a traditionally hit and miss affair, combined in equal part fabulous special occasion and tiresome old tattiness, but in amongst the repeats of old movies and trite kids’ specials, there’s a wealth of hidden gems to be uncovered.

Join Paul as he takes an informed, if idiosyncratic, journey through the world of festive TV, picking out the highlights of his own lifetime of watching…

Paul Magrs is a novelist, dramatist and visual artist, based in Manchester. 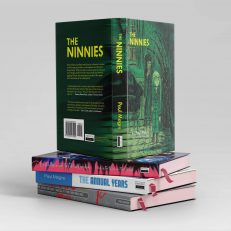 You're viewing: A Magrsian Quartet £40.00
Add to basket