Bafflement & Devotion: Iris at the Edges

A blonde in a catsuit flirting with the 8th Doctor, a scruffy old dear exploring a universe hidden in a cupboard in the Bus, the spitting image of the glorious Katy Manning on Neptune with its anatomically extravagant inhabitants, an elderly author of lesbian fiction …Iris has had a lot of faces, and been to a lot of places. She’s been all the way to the edges and back again, so it any wonder some of her adventures have been misplaced over the years, or grown tricky to uncover?

Here, gathered together for the first time ever in a new charity collection, are the Iris stories which appeared in charity anthologies, on convention stages, got lost on old web servers and fell down the back of the sofa…a selection of tales, both old and new, from the very edges of the Obverse…
ALL PROFITS DONATED TO CHARITY

In the Sixties (First published in Walking in Eternity, ed. Jay Eales)

Being an Extract from ‘The Amazing Adventures of Iris Wildthyme on Neptune’ (First published in Tales of the Solar System, ed. Paul Griggs).

Lost, Presumably Illogically Ignored – Anon (Discovered on an old FTP server, possibly the work of a Petit sister, but really, we have no idea)

And a big thank you to a few special devoted “Iris at the Edges” artists: 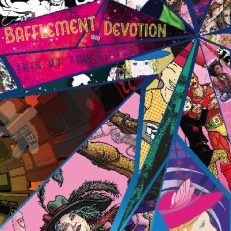 You're viewing: Bafflement & Devotion: Iris at the Edges £16.95
Add to basket