Downtime – The Lost Years of Doctor Who

‘…this is one of the best and most absorbing Doctor Who related books ever written!’ – user HumanBoy, GallifreyBase

‘It’s not easy to produce a book which works as both a story guide and detailed behind the scenes study, but Dylan Rees has managed it here, and the story as a whole is fascinating, funny, sad, alarming and sobering … as guides go, I can’t see this being bettered.’ We Are Cult review

‘Having just finished my copy of Dylan Rees’ ‘Downtime’, I can recommend it as an incredibly rich book that transcends the limitations of being a niche guide to spin off material, and becomes a both hilarious and painful insight into the realities of low budget filmmaking & audio production.’ – user jackapendrix, GallifreyBase

During the interregnum between the Seventh Doctor’s final adventures in 1989 and the relaunch of the series in 2005, BBC One broadcast only three new Doctor Who stories – a TV movie and two comic versions raising money for charity. Elsewhere, books and comic strips (and eventually licensed audios) kept the flame alive, but it seemed the BBC had little interest in reinvigorating the franchise on television.

Meanwhile, seemingly almost forgotten, some of the Doctor’s friends, enemies and legally dubious clones continued their adventures in the direct to video market and their own spin off audio adventures, written by and starring many of the cast/crew who had worked on the original series, and several who would work on the relaunched version.

Downtime – The Lost Worlds of Doctor Who combines archive interviews and articles along with over forty new interviews conducted by the author in order to tell the story of these dramas and their impact and influence, and to celebrate the dedication and ingenuity of fandom.

Downtime is written by Dylan Rees who has previously contributed articles to Celestial Toyroom, You and Who Else and “Breakin’ Point” Magazine. Outside of writing, he is a freelance Production Manager and Producer within the film and TV industry. 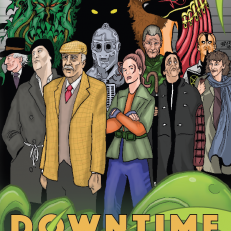