Dr Who Cushing Novelisations Books 5 to 8

‘In 1970, the Doctor Who franchise appeared to be in rude healh. Jon Pertwee’s new Doctor had arrived on TV, the first to appear on the small screen in colour. At the cinema, the Dr Who films jointly produced by Amicus (under their Aaru subsidiary) and Hammer Films had been evolving and gaining a loyal following for Peter Cushing’s eccentric Dr Who.

The fifth to eighth books – including the first anthology – in the Cushing Dr Who series of charity releases, currently raising money for Parkinsons Research. 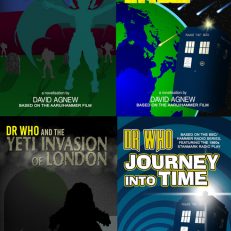