Dr Who: The Auton Attack

‘[Michael] Carreras steered Dr Who firmly into Hammer territory for the next two films, beginning with a loose adaptation of Robert Holmes’ two Auton serials which had met with so much popular acclaim on TV. Holmes was by now a favourite and regular Hammer writer for Carreras after being script editor on and writing episodes of the Dr Who radio series and a pair of film scripts. He was asked to write the script and was encouraged by Carreras to push the horror and the scares…The story contains aspects of both TV Auton stories, Spearhead from Space and Terror of the Autons, but incorporated them into a more ambitious plot than could have been afforded on TV.  Holmes also expressed a relief that his script was not burdened by a regeneration as the first Auton serial, Spearhead from Space, had been on TV.’

The sixth book in the Cushing Dr Who series of charity novels. 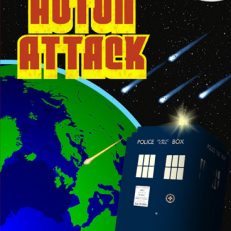