From a Story By… Volume Two

WHO’S GOT THE MONKEES TIE-IN NOVEL ABOUT EGGS AND NUCLEAR WAR?
Anna Maloney

DOCTOR WHO AND THE CHRISTMAS BRIDE – AN EXTRACT

“HAVE YOU GOT A LARGE ONE?”: CARRY ON NOVELS
Andy Davidson

THE NOTORIOUS NOVELIST AFFAIR (THE MAN FROM UNCLE)
James Bojaciuk

BOOKS FOR THE CHILDREN OF TOMORROW
Stephen Hatcher

A BIG EXCITING SHOPPING TRIP WITH THE DALEKS!
Brendan Jones

Also available in a super limited edition, the first TOM CORBETT novel,  Stand by for Mars!

Often described disparagingly as a sort of authorised fanfic, condemned as poorly written pulp, designed only to attract the cash of sad fanboys and girls, tie-in novels in fact range from purely functional transcriptions of tv scripts, through extended adventures, bizarre sidesteps and variant timelines, all the way to works of genuinely high art.

What were once the most ephemeral and throw-away books imaginable have, however, recently found themselves as collector’s items in their own rights, discussed on mailing lists, Facebook pages and Twitter feeds.  Particularly rare editions can swap hands for hundreds of pounds – and yet there is no magazine which concerns itself with their existence.

From a Story By… aims to remedy that lack…

Available in strictly limited quantities as an A5 paperback mag! 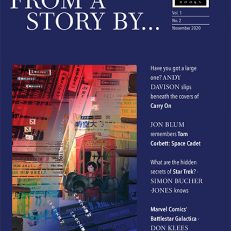