Just like the Makoto album we put out recently, here is another artist caught in the lockdown and something exciting and unexpected happening, Nick’s ideas for the 3rd 111H album met the landscape of his relocated home of Spain and took a few surprise turns in his imagination.

Don’t take my word for it, though, listen to James Jackson Toth:

Oh, sure, it’s an outstanding record, one that will silence any doubts anyone might still have about this former psychedelic noisenik’s ability to write and perform rousing, classic-sounding rock and roll songs.

But, see, I’ve been hearing the sketches of these songs for almost an entire year. Because they were originally intended to be recorded for the third One Eleven Heavy album, to be made in Nashville this summer, Nick emailed these tunes to the band members to solicit our feedback and ideas. But then the COVID-19 pandemic hit, and our transatlantic quintet (average bandmember commute: around 2500 miles) had to postpone our recording plans.

By now I’d listened to Nick’s demos a dozen times. I figured out a few cool guitar parts to play to accompany his, learned his arrangements by heart. I was wondering, with excitement, how we were going to pull off some of those crazy time changes and deep layers of percussion. So when Nick told me he was planning to release these songs on a solo album, I knew that I’d probably never get to sing the sweet harmonies on the breezy and exuberant “If I Were A Sawmill,” or get to chug along with the propulsive, crackling “City of Grit,” or jam on the heavy-lidded Doors-meets-Canned Heat choogle of “Ode To What.” In my mind, I’d already claimed these songs for One Eleven Heavy.

Maybe One Eleven Heavy will get to perform some of these tunes live at some point; I dunno. Nick will probably write twelve more just as good or better by the time the five of us finally reconvene to record our third album. But it won’t be these songs; songs that I have grown, over a short period of time, to know intimately, songs I have driven around listening to and singing along with, songs that set an intimidatingly high bar for my own contributions (as yet unwritten) to the One Eleven Heavy record-that-wasn’t. I don’t mind telling you that when Nick sings, on opener “If I Were A Sawmill,” “let’s get on the road tonight,” I get a little lump in my throat. Will we ever get to do this again?

Listen to Pino Carrasco if you must. My prediction is that it’ll be your favorite record of the year. It’s mine, too. But, you know, to hell with this guy. To hell with this insane, impetuous, mischievous, stubborn, charming, gentleman guitar wizard, and a pox on this beautiful and inspiring music that should have been One Eleven Heavy music.

The next time Nick and I have to share a bunk bed in some godforsaken “band hostel”—and I hope very much that we do—I’m totally gonna wait till he falls asleep and then hack his Twitter account and follow a bunch of Christian pop punk bands. Then I’m gonna draw a caricature of the Kool Aid Man on his face. 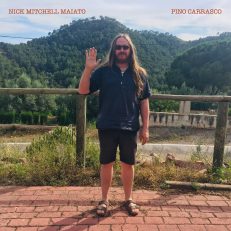