Senor 105: The Five Faces of Fear by Jay Eales

1972: El Acantilado – Fear of Heights. Lampalagua – Fear of Snakes. El Oscuro – Fear of Darkness. Tarántula – Fear of Spiders. Rata-Rey – Fear of Rats. Together, they were the Five Faces of Fear, among Mexico’s greatest heroes. Then the King Rat himself, Rata-Rey left and their fortunes dwindled. From the saviours of Mexico City to openers of Minimarts in only six months. Five is the magic number, as Acantilado was fond of saying, forcing them to endure the hell of Open Auditions.

Meanwhile, Señor 105, another of Mexico’s greatest sons has troubles of his own. With a delicate bomb disposal to deal with, 105 can’t catch a break, with constant interruptions from his alien houseguest Sheila and Rodrigo, bringing him mysteries he can’t resist. But for Señor 105, the clock is ticking.

2001: In a world gone wrong, ground under the heel of reptilian overlords, Señor 118, with his Ununoctium mask is ready to help, but it’s all just a matter of time…

This purchase includes a download of a zip file containing both epub and mobi versions of the book. 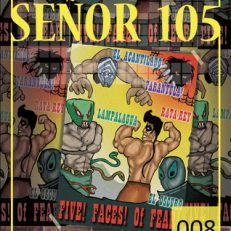