A new element has been discovered: Element 106 – Luxium, a stone that gives out great light and heat.

But is it truly the scientific marvel it is claimed to be? Senor 105 has his doubts.

With his only clue an alien code on the back of a postcard, he must enlist Mr Tea to help him find his friend. But they soon discover the plot is far stranger than they had imagined – involving a far-reaching political conspiracy, a faceless alien, and a very odd but influential septuagenarian spiritualist named Hilda Brackenshaw.

But it is not just Sheila’s life that is in danger. It is the entire world. Senor 105 and his friends must embark on a globe-hopping adventure to find the Faceless Man, and stop his nefarious plans.

But not before a cup of English Breakfast, and a slice of Battenberg.

This purchase includes a download of a zip file containing both epub and mobi versions of the book. 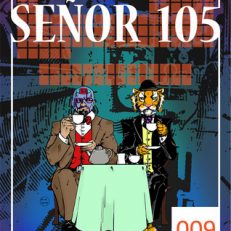