One snowy night in 1854, Elizabeth Howkins arrives in Strines.  Back in the place where the gods took her Bill from her, all those years ago.

But now, she has learned their secrets.  Now, she knows their weaknesses.  Now,  she is ready to exact her revenge.

But Elizabeth isn’t the only visitor to Strines.  Major Webber and his team have tracked her to the four corners of the Empire.  In Strines, they are determined that she must meet her destiny, in the name of the Queen.

And something about the upcoming conflict has attracted the attention of someone with their own plans for the chaos to come.  No less than the resurrection of that old, doomed, time-travelling voodoo cult, Faction Paradox…

Dale Smith has been writing for literally longer than he can remember.

He is the author of various books in the Doctor Who universe, as well as writing for the City of the Saved and Iris Wildthyme ranges. 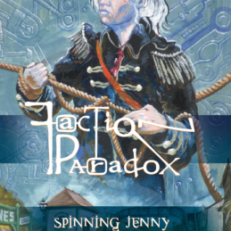