THE RISE & FALL OF SEÑOR 105 by Blair Bidmead

The past has caught up with Señor 105 and is headed on a collision course with the future. As the secret history of the solar system is revealed, the shocking truth may be too much for even him to bear…

Blair Bidmead is a novelist, illustrator and artist, who published a Señor 105 novella, By the Time I Get to Venus in 2012 and his first novel Weapons Grade Snake Oil with Obverse in 2017. 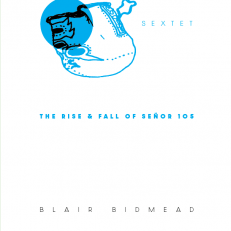