Why not try the first five Silver Archives at a discounted price, as four different authors investigate the various adventures of Sapphire and Steel, Paul Driscoll investigates the Down Under in the first season of Stranger Things and Matthew Kresal takes on Dark Skies in an Archive described by series creator Bryce Zabel as ‘the perfect complement to the series itself’?

Sapphire and Steel Assignments I & II

A remote cottage, where Time threatens the lives of two children. The war dead return to haunt the living at an abandoned railway station. Sapphire & Steel burst on television screens in 1980 with two iconic slices of folk horror, setting a high standard for the fondly remembered but all too brief series which followed.

“One foot up and the other foot down, which is the way to London town?”</i

A family from the future are hunted by the animal they have inadvertently brought back in time. A man with no face uses photographs to trap the unwary

Sapphire & Steel takes its first step into straight science-fiction, as the agents confront a young couple from 1500 years in the future, and their Changeling baby, before coming up against perhaps the most striking and well-remembered character in the series, the faceless Shape and his nursery rhyme chanting ‘children’

“Time, when it’s been tampered with to this extent, tries to counteract things!”

A murder mystery in a stately home set up to mimic the world of half century previously. A deadly confrontation for Sapphire and Steel (and Silver) in a motorway services café

The only Sapphire & Steel story not written by Peter Hammond, an homage to the Golden Age detective novels of Agatha Christie, is followed by the series finale, a surreal tale which even now, almost forty years later, still divides viewers

“You shouldn’t like things because people tell you you’re supposed to.”

In the summer of 2016 the story of Will Byers’ disappearance captivated a largely unsuspecting Netflix audience, leading many to binge watch the entire eight week series in one or two sittings.

Played out across a range of genres, Stranger Things is a coming of age tale, an extended horror flick and a psychological thriller, but above all it is an unashamed love letter to the work of many of the Duffer brothers’ most cherished creators, from composers and producers to authors and games designers.

Paul Driscoll examines how these diverse sources shaped the series and its reception, drawing attention to the prominent role of nostalgia, especially for the 1980s, and the often disturbing real and imagined events that lie behind Hawkins and the Upside Down.

Decades before Scully and Mulder opened The X-Files, another couple had already crossed America investigating the alien, the uncanny and the implausible, all the while attempting to uncover a conspiracy at the heart of the US government. In its sadly curtailed single season, Dark Skies suggested that much of the history of the 20th century we think we know is, in fact, a lie. Aliens have lived, hidden, alongside humanity since the late 1940s, planning invasion via a series of interventions in known history.

David McIntee is a novelist, who has written both original fiction and tie-in works for many of the largest franchises in television and movies.

Lesley McIntee graduated from the University of Manchester in 2011 with an MPhil on the figure of the Magus and the creative artist in German Romanticism. She has a lifelong interest in history of the occult, alchemy, myth and folklore.

James Cooray Smith is a freelance writer and critic whose credits include The Black Archive,  The New Statesman, Prospect, Private Eye, Hero Collector and That Mitchell and Webb Sound.

Paul Driscoll is an editor, author and publisher. He founded Altrix Books in 2019 and is one of the range editors of The Black Archive. 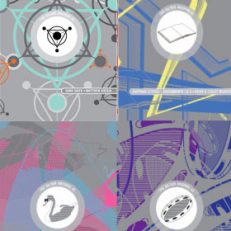