The Wallscrawler and Other Stories – Stephen Wyatt

Stephen Wyatt is a British writer for theatre, radio and television. Best known in genre circles for his work on Doctor Who, he has also written scripts for Casualty, Family Affairs, and House of Elliot, is a two time winner of the  Tinniswood Award for Original Radio Drama, and most recently wrote the play Two Cigarettes in the Dark for Penelope Keith.

“I first had the pleasure of working with Stephen on the Doctor Who adventure ‘The Greatest Show in the Galaxy’, playing the part of Mags, a reluctant werewolf ensnared by an exploitative intergalactic explorer, Captain Cook. All these years on, I am proud to have become a personal friend of Stephen’s and was honoured that he chose to write a play for me.

I am now more in awe of him than ever, having read this collection of short stories which leave no-one in doubt as to why his two Doctor Who stories are so memorable and well-loved. He is a master of characterisation; the personalities in his stories are empathetic, believable with a healthy dose of humour of the self-deprecating or ironic variety, whether we’re in the head of an intergalactic fortune-teller, a five thousand year-old ice man ruminating how his cadaver has affected the lives of all the people who ever set eyes on his remains or an elderly woman about to be put on the scrap heap from her job in an art gallery.

I didn’t expect to enjoy six stories based on prophets from the Old Testament but I have to say that these were perhaps my favourites…especially the one told by a spice trader witnessing the final days of Sodom.

So, bravo Stephen Wyatt. Looks like you’ve written another opus that will stand the test of time and many dimensions!” – Jessica Martin, actress, and author of Life Drawing: A Life Under Lights.

“Of all the writers in Doctor Who’s long history, is there any voice more distinctive than Stephen Wyatt’s? He creates strange new worlds that are both crazy and credible, characters that are larger than life and yet achingly, movingly human. I have been in awe of his imagination since I saw it on TV as a teenager. Reading the full range of his work here, in Who and far, far apart from it, is a joy.” – Robert Shearman, author of Dalek.

“Stephen Wyatt brought the macabre and camp into Doctor Who.” – Paul Magrs, creator of Iris Wildthyme. 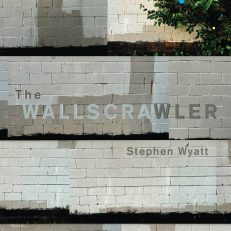